Skip to main content and our Accessibility Statement may be found in the footer of our website.
Back To Obstetrics Stories 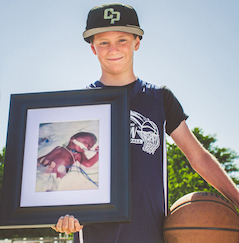 Three months premature, Parker had a hole in his heart and blood in his ventricles as a newborn at Sierra Vista’s NICU. Today, he’s a healthy 12-year-old boy, who loves swimming and basketball.

Mom: “Parker’s 12. He loves basketball. He’s just energetic, loves to be outside, loves to swim.”

Dad: “Him being born three months early at one pound 11 ounces, I didn’t know what to expect.”

Mom: “When he was born, every single odd was against him. He had blood in his ventricles, they had to tap his brain, he had a hole in his heart. So everything that you could think of that’s against a preemie, he had. You know, we were told many times he would not make it through the night. We had lots of guardian angels, that’s all I can say.”

Dad:“ I got to know the nurses real well and the doctors and it’s just a really good experience ’cause, you know, they made you feel comfortable and you can tell they really cared. I was just really impressed with the whole NICU and how everything was handled. We’re lucky to have a NICU, you know, so close to our community.”

Need a doctor for your care?
Search for an OB/GYN Today