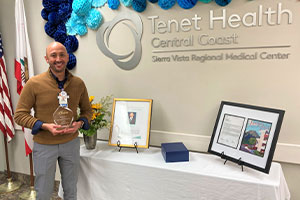 San Luis Obispo and Templeton, Calif. – Tenet Health Central Coast has announced that Sierra Vista Regional Medical Center’s Chief Nursing Officer Arthur Dominguez Jr. and Twin Cities Community Hospital’s Chief Nursing Officer Robert Cook, have both been honored by Tenet Healthcare as part of its annual recognition program. Not only have both been named a “Tenet Hero” for their incredible contributions in 2020, but also Mr. Dominguez has been inducted into the Tenet Hall of Fame.

The Tenet Heroes program celebrates those individuals who make a meaningful impact within their respective communities that goes above and beyond their daily job responsibilities. Nominated by fellow colleagues, Tenet Heroes exemplify the company’s core values and key tenets of its Community Built on Care.

Mr. Dominguez was recognized as a Tenet Hall of Fame for his many roles during the pandemic, including being the hospital’s Covid-19 Lead and Incident Commander, which involves collaboration with local governing bodies, and being the Chief Nursing Officer of the County's Alternate Care Site. His work was instrumental in the success of the Tenet Health Central Coast Tele-ER platform to help manage patient flow during the epidemic. As the Chair of the LGBTQ+ Healthcare Equality Advisory Council, Art never loses site that the patients are the core of care. Each year, a smaller group of nominees are inducted into the Tenet Heroes’ Hall of Fame, the Company’s most prestigious honor for employees. This year, a total of only 24 individuals were named to The Hall of Fame. 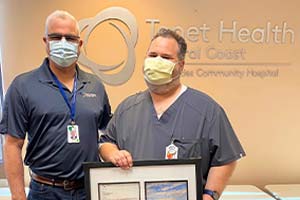 Mr. Cook was recognized as a Tenet Hero for his role in the launch of the Tele-ER at Twin Cities Community Hospital, ensuring that the Twin E.R. staff and physicians were fully prepared for a seamless launch of this significant initiative, especially since Twin is the largest and busiest emergency department in the County, serving a sizeable geographic area. Mr. Cook and Mr. Dominguez led the effort to coalesce, and collaborate a County-wide effort across multiple hospital Medical Staffs to create a surgical case-risk evaluation methodology that provided a logical, scientific, and uniform way to return surgeries to the hospitals after the initial "elective" case moratorium during the pandemic.

Need a doctor for your care?

Use Our Physician Finder

Get our advice and upcoming events about weight, pain, heart and more.